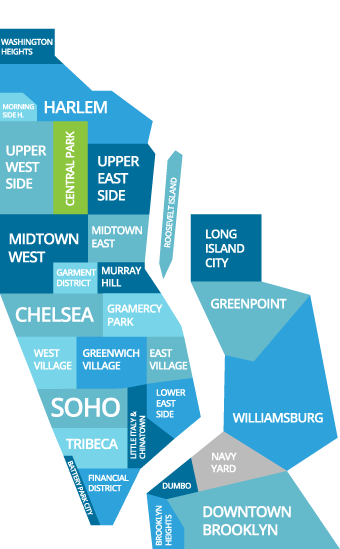 New York City is the most densely populated city in the United States, with a population of 8.5 million living in a land area of 305 square miles (790 km2). New York City consists of five boroughs – the Bronx, Brooklyn, Manhattan, Queens, and Staten Island.

Manhattan’s is the most populous borough in New York City. The estimated daytime population in Manhattan is over 4 million with a large influx of residents, commuters, visitors and tourists. Manhattan has been recognized as the economic and cultural center of the United States and its Financial District has been called the financial capital of the world. Many neighborhoods and landmarks in Manhattan have become well known to New York City’s 50 million annual visitors.

Manhattan’s many neighborhoods are not named according to any particular convention. Some are geographical (the Upper East Side), or ethnically descriptive (Chinatown, Little Italy). Others are acronyms, such as SoHo (“SOuth of HOuston”) or TriBeCa (for “TRIangleBElowCAnal Street”). Harlem, is named after the city of Haarlem in the Netherlands while Murray Hill, is named after the famous Quaker merchant – Robert Murray. Some have simple folkloric names like Meatpacking District and Hell’s Kitchen alongside their more official but lesser used titles.